CBT designed Hogan Lovells' new office space in Downtown Boston and wanted the space to reflect Hogan Lovell's global direction and qualities. The office space consists of one full floor and one partial floor on the 20th and 21st floors at 125 High Street. The two-floor space with an interconnecting stair total 41,000 square feet. The firm’s new location contains a variety of workspaces, meeting and conference rooms, and cafe.

At the start of the project, we, along with the client, studied the various neighborhoods of Boston, looking for local icons to influence the design of the Hogan Lovells Boston office. The team chose the Zakim Bridge and the Lovejoy Wharf to serve as our inspiration. This architectural element greets you as you enter this new space, making a strong statement of connection.

The angles from the bridge were picked up in other elements such as the wood wall that connects the elevator lobby with the reception area, and two bronzed steel screens, designed to define separate spaces within the large open area In the middle of the conference center, which could be used during events for socializing and informal dining.

We worked with a local furniture maker to create several tables from salvaged wood from the original Lovejoy Wharf which ran under the location of the current Zakim Bridge. By combining these different elements, we created a unique and inspiring space. 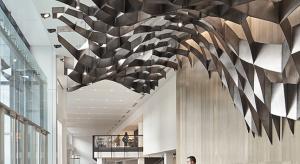 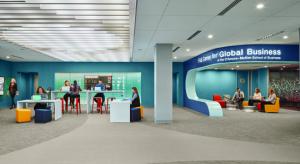 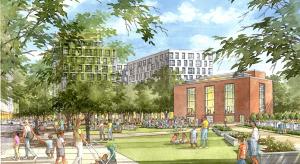