When Suffolk University purchased the theater, it had been unoccupied for 20 years and was in a state of severe neglect. For structural and programmatic reasons, only the facade could be saved. CBT designed the meticulous restoration of the façade, de constructing the Modern’s marble and sandstone exterior block by block, numbering and restoring each piece individually before re-assembly. Internally, a new stage and auditorium is fit into a space only 36’ wide at the proscenium line, and is fronted by a two-story lobby space which doubles as a gallery. Additionally, ten stories of suite-style residential space were built above the theater to serve as Suffolk’s newest residence hall.

The form and scale of the interiors reflect the design of the original theater in many ways. The plan retains the original narrowness of the side walls, creating an intimate performance space ideally suited to spoken word drama but easily adaptable for musical theatre, film and many other events. One of the defining characteristics of the original theater was its hand-painted walls. The University commissioned Tony Award-winning scenic designer John Lee Beatty to design and paint wall treatments for the new Modern that pay homage to the tradition of scenic paintings that once graced the original theatre. 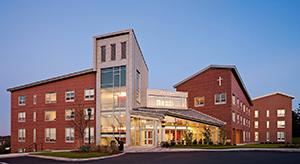 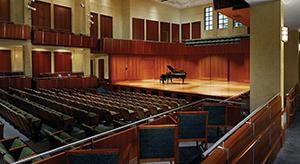