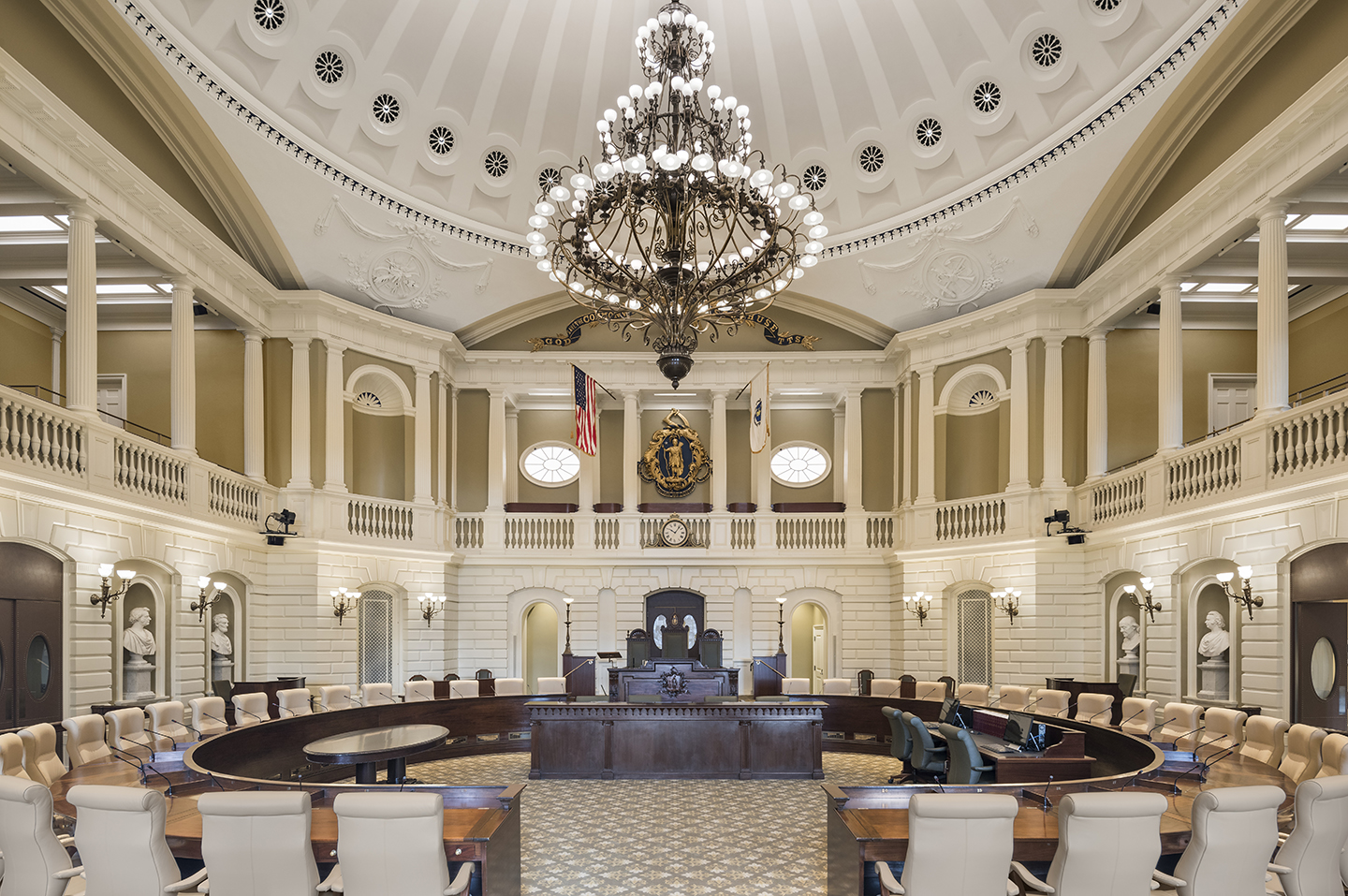 On January 2, 2019, the newly-restored Massachusetts Senate Chamber was unveiled to the public for the first time during the 2019 Inauguration event. CBT’s sensitive and thoroughly-researched design incorporated significant improvements in accessibility and integration of technology, while reworking lighting, air quality, and acoustics to suit contemporary use.

The historic Senate Chamber, located beneath the golden dome of the Massachusetts State House, had not seen a major renovation in 120 years. Originally designed by Charles Bulfinch in 1795 for the House of Representatives, the Chamber had undergone repeated alterations, often within the context of larger State House expansion projects. Many alterations were respectful of the original design, and few attempted to completely transform the look of the room, however over time, wear, layers of maintenance, and outdated infrastructure took a cumulative toll on the condition of the Chamber. Following extensive historical research and design study, the Chamber was renovated in 2018 to meet 21st century needs, while remaining faithful to its architectural history and returning the room to its historic colors of 1898, when it first became the meeting place of the Senate.

Engaging a plan for holistic transformation, the Senate Chamber restoration took on a multidimensional approach that considered all angles, from renovation of grander infrastructure to preservation of historic detailing. Large-scale improvements were planned with meticulous attention to detail: added acoustic panels were seamlessly and discreetly woven into patterns of the domed ceiling; LED fixtures and lighting enhancements maintained a historic essence by matching newly manufactured glass housing to original designs; and a new HVAC system improved air flow and climate control through sustainable replicas of 19th-century snowflake-patterned grilles in the Chamber ceiling. The team undertook diligent restoration efforts to maintain historical accuracy and honor original design, including careful disassembly and reassembly of both the Chamber’s intricate chandelier and nearly 1,500 wood rustication panels. The addition of several accessibility features – a chairlift to the rostrum, adjusted desk heights to accommodate handicapped seating, and various hearing and visibility aids – paired with improved technological infrastructure to transform the room into a functional, sustainable, and universal space.